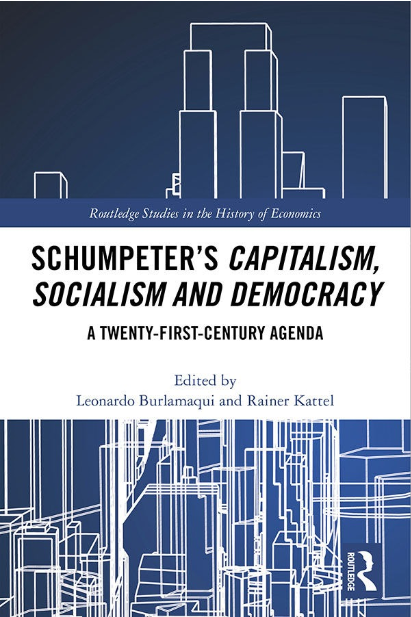 Schumpeter’s great book has been a classic since its publication in 1942. But the Great Crash of 2008 has made it even more relevant than before. Capitalism has been called into question and Socialism has gained popularity as a claimed alternative; worrying global developments are now threatening Democracy. This present volume is timely and forward-looking.” ― Geoffrey Hodgson, Professor in Management, Loughborough University London

“The perspective of the informed lay public on how modern capitalist economies work long has been Schumpeterian. However, today’s academic economic discipline recognizes Schumpeter hardly at all. This book makes the case for bringing the Schumpeterian perspective to the center of our discipline’s thinking and writing. I could not agree more. And readers who have any doubts about this are highly likely to be persuaded by the books well developed argument.” ― Richard Nelson, Professor of Economics, Emeritus, Columbia University

“Joseph Schumpeter might have been the most complete economist of the 20th century: linking technology, finance, development, and crises across the history of economic thought. Yet, his popularity peaked in the early 1990s when his metaphor of ‘creative destruction’ explained fast economic growth without inflation. Now Burlamaqui and Kattel have done us all a big favour by bringing together an outstanding group of researchers who have brought Schumpeter’s thoughts back into the core of today’s problems. Their volume is a most useful antidote against neo-classical economic orthodoxy at a time when this is sorely needed!” ― Erik S. Reinert, Professor of Technology Governance and Development Strategies, Tallinn University of Technology, Estonia and Chairman of The Other Canon Foundation, Norway